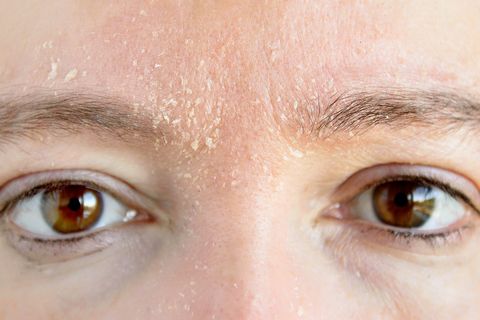 Often people ask me how homeopathy can help them for their issues. A phrase I like to use is “homeopathy is a process, not an event”. This makes a lot of sense to me, but sometimes may be difficult to understand exactly what I mean. The following is a good example for the homeopathic process, and also the many levels on which homeopathy acts.

Some time ago I treated a young woman, who had had flaky skin on her face for quite some time, that was worse along the hairline and around the eyebrows. She’s a lady that likes to keep her troubles private and every time she had to go through stressful periods, her dry, flaky patches flared up, becoming itchy and inflamed. She found this very upsetting and came to see me.

After taking the case I chose a remedy that covered all her symptoms, from her reserved character to the flaky skin. She started taking the remedy daily and quickly felt much better – for a couple of weeks. Then the patches started appearing again.

At our follow up consultation we decided to go up in potency with the same remedy and the same happened over the next month – improvement and then back to a flare up.

At that point we decided to investigate what else might be keeping the improvement from being permanent. We discussed how she had been and she mentioned having had vivid dreams about her grandmother who had passed away some time ago after a long illness. In that dream her and her grandma were the same person, and she found that story quite striking. This, among other things, led me to choose a miasmatic remedy (that addresses the family tendency to certain illnesses), and she took 1 dose of this remedy.

Two days after the remedy she woke up to what seemed to be a strong flu, with high fever, body aches, streaming eyes and nose. This lasted for a couple of days, and then very quickly got better. A week later the indicated remedy was repeated in the dose and frequency that had been last prescribed.

At next month’s follow up my patient’s skin was clear, she had decided to make some changes in her life (go back to work now her children were at school), and her energy was great – she started running 5K most days of the week and lost all the baby weight she had left. The skin has remained well (5 years later), with only the occasional flare up in stressful times.

If you liked this blog share it. If you want to find out more book in for a free 15 minute chat.

What are you looking for?